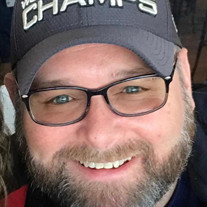 Bryan Lane Nason, 47, of Manassas, Virginia (formerly of Kingston, New Hampshire) passed away after a sudden illness on Saturday, May 29, 2021. Bryan was born on Thanksgiving Day, November 22, 1973, in New Hampshire, and spent his childhood growing up in Newmarket among his friends and cousins. He eventually moved to Kingston, and graduated from Sanborn Regional High School in 1992. Following graduation, his decision to enlist in the United States Marine Corps was a life changing one that would bring him great pride and fulfillment throughout his entire life. Bryan is a veteran of the United States Marine Corps enlisting on August 10, 1992. After successfully completing boot camp at Marine Corps Recruit Depot, Parris Island, South Carolina, Bryan was transferred to Camp Johnson, North Carolina where he completed the Basic Disbursing Clerk Course. Bryan completed his active duty service at the Parris Island Finance Office in South Carolina and the 3D Force Service Suppport Group Disbursing Office in Okinawa, Japan. Bryan achieved the rank of Corporal and was awarded the Good Conduct Medal, the National Defense Service Medal, and the Sea Service Deployment Ribbon. Bryan was honorably discharged from the Marine Corps on August 9, 1996. Bryan's experience in the Marine Corps played a very important role in his life. He frequently pointed out that the Marines taught him the values of honor, courage, commitment, discipline, and teamwork, which he instilled in his daily life. He developed a successful career in the financial industry, and after spending most of his adult life in New Hampshire he took a job in Virginia at ID Technologies. Bryan was truly one of a kind; you knew exactly what he was thinking, when he was thinking it. Those who knew “Nas,” this fun, loyal guy will miss how he lit up a room whenever he entered it. His love of New England sports knew no bounds. His passion was infectious, and when New England was in a game, you could bet Bryan was their loudest fan in the room. It is hard to find of photo of Bryan that didn’t feature him wearing some item of sports gear, especially the New England Patriots. Bryan was happiest surrounded by friends, cheering for his New England teams, and living his life his way. He enjoyed a lobster feast, a round of golf, a great beer, and a good laugh. Bryan is survived by his father, Paul L. Nason, of Danville, NH, his mother, Karen Dubay, and sister, Tammie L. Nason, both of Dover, New Hampshire. He also leaves behind several beloved uncles, aunts, cousins, and second cousins who will miss him dearly. He will be remembered by the lifelong friends he made along the way, in NH, in the Marines and those in Virginia - he counted them as family. A celebration of Bryan’s life will be held on Sunday, June 27, 2021 at 1:00 p.m. during the Boston Red Sox game against the New York Yankees, at the Kingston Memorial VFW Post 1088, 93 NH-125, Kingston, NH. Bryan will be interred at Quantico National Cemetery at a future date, funeral arrangements are being made by Pierce Funeral Home Inc. of Manassas, VA. To keep Bryan’s memory alive, cheer as loud as you can during a New England sports game, honor those who serve our country in the best way you can, or make a donation in his memory to a charity he was passionate about, the Northern Virginia Veterans Parade where he served as Vice President of the Board of Directors: www.vetpar.org or mail it to 8665 Sudley Road, Suite 247, Manassas VA 20108-4588.

Bryan Lane Nason, 47, of Manassas, Virginia (formerly of Kingston, New Hampshire) passed away after a sudden illness on Saturday, May 29, 2021. Bryan was born on Thanksgiving Day, November 22, 1973, in New Hampshire, and spent his childhood... View Obituary & Service Information

The family of Bryan Lane Nason created this Life Tributes page to make it easy to share your memories.