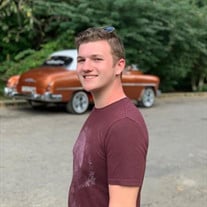 Broderick “Brody” Keenan Fisher passed away unexpectedly on January 25, 2021 at age twenty-one. Brody was born on December 30, 1999 and from the moment he came into this world, he was a sweet, generous, fun-loving boy. He was the third child of six born to Matt and Erin (Maurer) Fisher. From a young age, his brilliant mind was a wonder to behold. Reading chapter books by age 3 and soaking in knowledge like a sponge, Brody’s talents in engineering and science quickly took root. He was fascinated with pyramids, chemistry experiments and space but most of all airplanes and aerodynamics. He also loved animals and volunteered at the Prince William County Animal Shelter from 2015-2016. His intelligence, matched by his gregarious personality and empathy for others, only grew bigger as he got older. After homeschooling and graduating high school in 2017, he began attending Virginia Tech majoring in Aerospace Engineering. For the first time, he finally had an academically challenging curriculum and thoroughly enjoyed college life. He made many good friends and realized his life-long dream of having his own room when he moved into an apartment with his close friends. Brody took advantage of travel opportunities through Virginia Tech’s Study Abroad programs in China and Germany as well as family trips to Cuba, Mexico and Europe. Brody was set to graduate this May and planned to start an accelerated Masters program in Aerospace Engineering at Tech in the fall where he was a finalist for a Teaching Assistant position. He was invited to a second internship at General Electric this coming summer. Brody loved making people laugh and he leapt at any opportunity to go out of his way and make others smile. He always enjoyed a good stunt, a clever pun, and bringing laughter into every situation. His light-hearted humor could relieve tension in any situation, and his hidden talent at karaoke was quite legendary among his friends and colleagues. Most importantly, Brody was an irreplaceable part of his large family. He was the sweet brother who would do anything for his younger sisters and joined his older brother and sister on one back-packing trip and quickly decided he preferred indoor activities. He made the BEST mac n’ cheese, and he would happily make it upon request any time, day or night. He was the grandson who visited his grandparents regularly, helped with projects and talked for hours. And, he was the most loving, affectionate son any parent could ask for. Our hearts are profoundly broken at this loss. His wit, sarcasm and his position as the regular family game night winner will be terribly missed. Brody is survived by his parents, Matthew Fisher and Erin (Maurer) Fisher both of Manassas, VA; his sister Brenna Fisher and brother Dennis Fisher both of Laramie, WY; sisters Mallory, Grace and Olivia, also of Manassas. He leaves his maternal grandparents, James and Janet Maurer of Chicago, IL; and his paternal grandparents, Dennis and Mary Fisher of Lewes, DE. He is also survived by several aunts, uncles, and cousins. In lieu of flowers, the family appreciates that donations be made to Prince William Animal Advocates, an organization that provides medical care and support to shelter animals: https://pwanimaladvocates.org/ A service will be held at Grace Life Community Church in Bristow, VA on Monday, February 1, 2021. The viewing is at 2:00 PM followed by a service at 3:00 PM. The services will be streamed from Erin's Facebook account (https://www.facebook.com/erin.m.fisher.3/)

Broderick &#8220;Brody&#8221; Keenan Fisher passed away unexpectedly on January 25, 2021 at age twenty-one. Brody was born on December 30, 1999 and from the moment he came into this world, he was a sweet, generous, fun-loving boy. He was the... View Obituary & Service Information

The family of Broderick Keenan Fisher created this Life Tributes page to make it easy to share your memories.

Send flowers to the Fisher family.