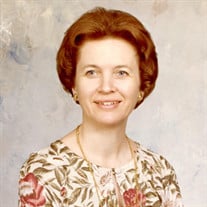 Betty S. Ratliff passed away peacefully on March 22, 2022, with her family by her side. She was born on June 27, 1932, the second child and first daughter of Bert and Ivy Stratton. With her big brother Wayne and younger sister Barbara, the family was complete. The family lived in Everson, Washington where Betty talked fondly of a childhood spent clamming at Birch Bay, picnicking near Mt. Baker, and picking berries at local farms in the summers. Growing up very close to her grandmother, Annie Arnell who was a dressmaker, Betty’s lifelong love of sewing began. At a young age she also learned to knit, crotchet, and embroider. Betty was musical, too, where in school she sang in the choir and played the piano and snare drum. She sang in the church choir in Virginia Beach and Vienna, VA for many years. After graduating from Mt. Baker High School in 1950, Betty went on to St. Joseph’s School of Nursing in Bellingham, Washington where in 1953 she earned her Nursing degree. Once finished with school, Betty worked with her brother who had recently finished medical school and established a local practice. The brother/sister Stratton medical team didn’t last long though, as soon Wayne was called up from the Army Reserves to go to the war zone in Korea. Betty didn’t stay idle for long, marrying Clint Upham in December 1954 and having their first child, Deborah (Debbie) Ann in September 1955. Clint’s career with the U.S. Coast and Geodetic Survey (the predecessor to the National Oceanic and Atmospheric Administration [NOAA]) soon had them crisscrossing the United States with their young and expanding family. Their second child, Susan was born in Norfolk, VA (1959) followed by Bob in Honolulu, HI (1961) and finally Dan in St. Petersburg, FL (1963). After additional assignments in Berkley, CA and Virginia Beach, VA the family moved to Vienna, VA in 1970 where Betty was able to settle in one place for more than a few years. In 1976 Betty and Clint divorced initiating her return to nursing where she worked at Sibley Memorial Hospital in the NICU. Soon she met another divorcee, Blake Ratliff, an engineer working for the Veterans Administration. After a short courtship they married in January 1979, expanding her family again with the addition of two stepdaughters – Julia (Julie) and Teresa (Annie). While Blake and Betty finished their careers, they planned for their retirement and designed and built their water-front, dream home in Montross, VA. In 1987, they retired to the Northern Neck of Virginia where Betty soon became active in the local garden club, the Altar Guild of the Yeocomico Church, Meals-on-Wheels and the local quilt guild. As Betty settled into retirement she finally had the time to pursue her love of quilting. But, after 17 wonderful years in Montross, Blake and Betty decided to downsize and move back to Northern Virginia to be closer to family. In 2004, they moved into their home in the Regency at Dominion Valley in Haymarket, VA. There, Betty continued quilting becoming an active member of Haymarket Quilter’s Unlimited, a founding member of the Regency Stitchers and since 2007 a member of the Mid Atlantic Applique Society (MAAS). She was a talented and prolific quilter who took great joy in giving away the quilts that she spent hours creating with love. She particularly enjoyed applique quilting and even taught classes at Suzzie’s Quilt Shop in Manassas. Through quilting, Betty developed long time friendships with many fellow quilters and wonderful neighbors. In late 2019, Betty was contacted by the Virginia Quilt Museum in Harrisonburg, VA who asked her if she would be willing to come to the museum to do a trunk show and lecture. She was greatly honored and began gathering her many quilts and writing speaking notes as the date in the spring of 2020 approached. But, as COVID swept over the world, the engagement was postponed several times before it was finally cancelled. In the fall of 2021 she opened her home to a large group of friends and was finally able to give her trunk show. While quilting was Betty’s passion, her first and greatest love was for her family. She was a beloved mother to her children, providing a home filled with love, gentle guidance and encouragement. She guided her children to explore music, sports and other areas of interest and mostly to be responsible and caring and to live life to the fullest. As the years passed, she found great joy and happiness as her family added grandchildren and great-grandchildren. Betty cherished the many family gatherings for birthdays and holiday celebrations which she never missed. She will be profoundly missed by her husband Blake, children Debbie Hoibroten, Susan Ralph, Bob Upham, Dan Upham (Kellie), Julia Groves (Joe) and Teresa Marsten (Jaime) along with her extended family and those who knew and loved her. She is also survived by her grandchildren – Michael Upham (Erin), Christopher Upham, Megan Upham, Lindsey Ralph, Taylor Upham, Kristina Maddox (Christopher), Justin Marsten (Catherine), Elisabeth Chidester (Todd), Joseph Groves Jr., Sarah Groves (Kelly) and Emily Groves, her great-grandchildren – Grace Upham, Thomas Upham, Anna Maddox, Chase Maddox, Lydia Marsten, Laiken Chidester, and Isaiah Groves-Cruz, and her nephews – Chuck Stratton and Mark Stratton. Visitation will be held at Pierce Funeral Home (9609 Center Street, Manassas, VA 20110) on Friday, April 8th from 6:00 – 8:00 pm. A Memorial Service will be held at St. Paul’s Episcopal Church (6750 Fayette St, Haymarket, VA 20169) on Saturday, April 9th at 11:00 am. Committal Service – Quantico National Cemetery, Monday, April 11th. In lieu of flowers, donations may be made to the Virginia Quilt Museum in Harrisonburg, VA

Betty S. Ratliff passed away peacefully on March 22, 2022, with her family by her side. She was born on June 27, 1932, the second child and first daughter of Bert and Ivy Stratton. With her big brother Wayne and younger sister Barbara, the... View Obituary & Service Information

The family of Betty S. Ratliff created this Life Tributes page to make it easy to share your memories.

Send flowers to the Ratliff family.