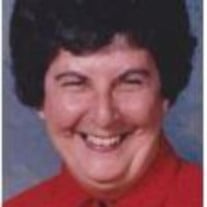 Betty J. (Mumma) Knowles (Age 86) of Nokesville, VA passed away on Sunday March 28, 2021. She is survived by her son Mark & his wife Yvonne (Clark) Knowles, grandchildren Emily (Knowles) Eppley and Valerie Knowles, brother Richard “Dick” Mumma and his wife Sally (Blaine) Mumma. She was preceded in death by her husband Walter Emerson, daughter Lisa Ann, brothers Wesley Ray and James “Jim” Mumma and his wife Marilyn E. (Thomas) Mumma. Betty was born in Everett, Bedford County, PA, growing up in Burnt Cabins, Fulton County, PA. She married Walter, an Army Private stationed at Fort Bragg, NC, on 12/23/1953. The ceremony was held at the Burnt Cabins Methodist Episcopal Church with the reception afterwards held at Walt’s family farmhouse in Fort Littleton, PA. After the big event, Betty graduated from Hustontown High School in 1954. In 1955, Walt was discharged from the Army, having achieved the rank of Corporal. At the urging of Betty’s uncle Howard “Carl” Fix, who lived in Pittsburg, PA, Walt interviewed with AT&T Long Lines. Walt was hired and Betty left Burnt Cabins to begin her journey as a “Bell” spouse. Betty’s high school ambition was to be a housewife. She far exceeded her goal during the 25 years Walt worked for AT&T Long Lines. They moved to Pittsburg, to Bedford, to Chambersburg, to Malvern PA, to High Bridge, NJ, finally settling in Nokesville, VA where Betty spent the last 43 years of her life. While living in High Bridge, NJ, Betty was a library volunteer at her daughter’s elementary school. She thrived in the challenge of learning the Dewey Decimal System and interacting with the teachers and students. Betty joined a bowling league with Walt known as “The Tuesday Night Owls” where the weekly event created new friendships & fond memories. But the most significant impact upon Betty while living in High Bridge was the first time she donned a motorcycle helmet with Walt. She joined Walt on weekends, touring local sites with a few of their neighborhood cycle buddies. After the move to Nokesville, VA in 1978, Betty & Walt joined a motorcycle club known as “The Retreads – XL Plus”. Betty enjoyed the local rides and meeting fellow enthusiasts. Over the years, as the size of the Walt’s motorcycles increased, so did the mileage. Betty & Walt’s endurance rides took them to the West coast twice, and once to Alaska and, the North West Territory crossing over the Artic Circle line. It was through one of Betty’s motorcycle friends that she was invited to apply for a job at a local surgical office as an administrative assistant. Betty enjoyed the challenge working in a professional office as well as being associated with a team of talented doctors. When her daughter Lisa was diagnosed with Lou Gehrig’s disease (ALS), Betty gave up her professional career to become Lisa’s full-time care provider at home. The love, strength, and endurance from Betty to make Lisa’s last five years with her family as comfortable as possible, was an inspiration to all. Two years after Lisa passed, her husband Walt had a stroke. Once again Betty became a full time care provider at home, until Walt’s passing in 2012. Betty loved to watch her children’s sporting & extra-curricular events. After her children had grown she continued the tradition watching both her granddaughters in their activities as they grew. The enjoyment of sports was natural for Betty, being a former high school athlete herself (Basketball, Softball, Track & Volleyball). In 2014, Betty’s health began to fail. She was diagnosed with a brain tumor. The surgery was successful and she recovered to lead a normal life again. Betty was fortunate to be self-sufficient and live in her own home. She was an avid reader of the Bible and prayer books her whole life. She sought & found comfort in many passages during the challenges she faced and overcame throughout her life. We never know what God’s plans are for us. It is only in hindsight when they are revealed. Reflecting upon & celebrating Betty’s life, it is clear to us what plans God had in mind for Betty. Through her strength, resilience, and actions in life, her love of family was first and foremost, of which they benefitted greatly. We love you mom. We will miss your smile, your stubbornness, your hugs, and even the breakneck speed at which you rode the mower around your lawn at 86 years old. Peace be with you. Due to COVID-19, there will be no funeral service at this time. There will be a graveside service at Union Cemetery, in McConnellsburg, PA at a future date to be determined.

The family of Betty Joan Knowles created this Life Tributes page to make it easy to share your memories.