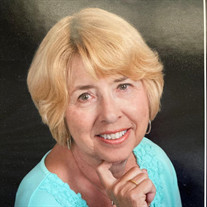 Betty Goodin Bauer, of Ashburn, VA, passed away peacefully on June 9, 2022 Betty was born in Logan, West Virginia but moved to Huntington, West Virginia, as an infant where she lived until graduating from Marshall University with a Bachelor of Education degree. After college, Betty (and her twin sister, Nancy) moved to Richmond, Virginia to begin her teaching career with Chesterfield County Public Schools. During her years as a teacher in Richmond, Betty earned a Master of Education degree from Marshall University and also taught graduate-level courses at Virginia Commonwealth University (VCU). On June 8, 1974, Betty married David in Richmond. Betty continued to teach in Richmond with Bruce being born in 1975, and Chris being born in 1977. During the summer and fall of 1977, Betty and David relocated from Richmond eventually landing in Fairfax, Virginia. By the summer of 1978, Betty was entrenched as a contributing member of the City of Fairfax. During the next seven years, Betty retained her teaching role in a number of ways: A teacher’s aide and reading specialist at Daniels Run Elementary School; A pre-school teacher and Sunday school teacher at Fairfax United Methodist Church; and as a teacher for “Homebound Students” for Fairfax County Public Schools. After Scott was born in 1985, Betty eventually returned to Daniels Run Elementary School as a classroom teacher. For the next thirty years, Betty remained an active participant in City of Fairfax activities including neighborhood and city civic organizations, youth sports, church functions, and of course education. While she was recognized frequently for her accomplishments and service, the lasting memory she would want for herself is as a person who was a passionate advocate for KINDNESS and LOVE. Betty is survived by her husband of 48 years (David), her children: Bruce (Nidya), Chris (Catherine), Scott; her grandchildren: Trey, Juliana, Isabella, Tyson, Taylor, Johnny, Olivia, Molly; her brother Paul (Diane) Goodin; and her twin sister Nancy (Bob) Vick.

Betty Goodin Bauer, of Ashburn, VA, passed away peacefully on June 9, 2022 Betty was born in Logan, West Virginia but moved to Huntington, West Virginia, as an infant where she lived until graduating from Marshall University with a Bachelor... View Obituary & Service Information

The family of Betty Goodin Bauer created this Life Tributes page to make it easy to share your memories.

Betty Goodin Bauer, of Ashburn, VA, passed away peacefully on...

Send flowers to the Bauer family.