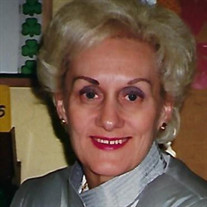 Bette Dolores Cascales Saxton passed away on January 31, 2021 at the age of 84. She was a resident of Woodbridge, VA for over 50 years. She is survived by her sons Patrick J. Saxton II of Manassas VA, Craig J. Saxton of Washington State, Bryan D. Saxton of the UAE, six grandchildren and two great grandchildren. Her daughter Brenda and former husband PJ preceded her in death. Memorial services are private. Bette Dolores Cascales was born to Joe and Dolores Cascales in Los Angeles in 1936. She was raised with her sister Joan in the family home on Maymont Drive in Windsor Hills. As a Marine Corps wife whose family was transferred on a regular basis, Bette raised her four children while going to night school and substitute teaching during the day. “Mommy” was also the sole head of household each time her husband PJ was sent overseas. Bette attended Pierce College, Rutgers University and eventually earned her bachelor’s degree from UCLA. Upon moving to Virginia, she became a Fairfax County teacher where she taught primarily at Gunston Elementary School in Lorton, Virginia. Bette subsequently earned her MBA from Central Michigan University and completed her public-school career as a Learning Disability teacher. Bette excelled at playing classical, religious, and Broadway music on the piano, due to the influences of her father and mother. Joe Cascales was the string bass lead for the CBS Radio Orchestra under the direction of Wilber Hatch. Her mother, the former Dolores Zeller, was an accomplished pianist in her own right, and an LA Public School teacher. Both were well known in the LA entertainment circles of the 1930s-40s, along with her uncles Bud Cabot and Johnny Richards. They routinely hosted notable guests from the radio and movie business in their home, which resulted in a strong musical presence in their lives. Bette’s musical talent also led to her secondary occupations as a piano teacher and piano player at the former Luige’s Italian Restaurant in Alexandria, Virginia. After retiring, Bette continued to enjoy tending to her orchids, roses, and pets, and entertaining her family, friends, and guests with her wonderful piano music. Bette was a good and loving Mom who is missed by her family and friends.

Bette Dolores Cascales Saxton passed away on January 31, 2021 at the age of 84. She was a resident of Woodbridge, VA for over 50 years. She is survived by her sons Patrick J. Saxton II of Manassas VA, Craig J. Saxton of Washington State, Bryan... View Obituary & Service Information

The family of Bette Dolores Cascales Saxton created this Life Tributes page to make it easy to share your memories.

Send flowers to the Saxton family.