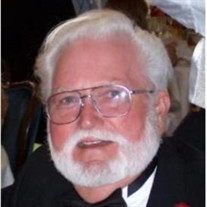 Bernard Marion Moses was born on April 12, 1937, the third child of Marion and Hazel Moses and was raised in Alexandria on a working farm. He married Betty Ann Steele on February 10, 1955 and, though they were teenagers, they remained married until her death, 64 years later. They had three children, Vonnie Patricia (Ken), Bernard Marion Jr (Justine) and Sherry Darlene (Rick), raising them in Manassas Park, VA. Very active in the community “Mo” was involved in the Manassas Park Fire Department, progressing from fireman, Captain of Rescue, Lieutenant and finally Chief. Mo was also very active in his children’s lives supporting them through plays, sports and scouting activities. While he didn’t graduate high school, he was an excellent example as he got his GED in the early 1970’s. In 1970, Mo started at Fairfax Hospital and worked there for 30 years. His community service continued as he volunteered as the hospital Santa starting in his first year and for many years after he retired. He would ride his motorized sled to every department, cheering the staff and taking pictures. He loved the “Breakfast with Santa” for the staff and their families, convincing the kids with his knowledge of their parents, and sometimes grandparents, that he worked with. At the Christmas Tree lighting, he would come in on the hospital helicopter and thoroughly enjoyed the rides. The most special times, though hardest on him, were the times he spent with the pediatric patients in the hospital during the Christmas season. He would talk with the parents and, if wanted, arrange to deliver the presents personally. There were terminal patients he spent one-on-one time with so they would have their Christmas early. His example made it easier for his grandchildren to understand the true meaning of Christmas as they played his “elves”. His life of service continued through church life and volunteering on boards, singing with the choir, live Nativities, mission trips and any other activities he thought he could do. Serving in many positions in the Walk to Emmaus program, Mo passed on his faith and love of Jesus with many others. He spoiled his wife, Betty, over the years and enjoyed supporting her in many hobbies and mission trips. Some of their long-term dreams came true as they traveled the US and world together after retirement. Though he regretted not getting to Italy, they did hit most of their “wish” list. None of these activities interfered with his family! He loved nothing more than having the grandchildren around and, as one said, “taught many life skills such as riding the lawnmower”. The many famous (and infamous) family vacations to Hilton Head were always looked forward to and eventually covered 3 generations. Mo is survived by 2 children, Bernie (Justine) and Sherry (Rick), 11 grandchildren and 19 great grandchildren. His daughter Vonnie and great-grandson Daniel preceded him in death. Mo will be missed but his example of how to live, love his family, be of service to God and his community will live on. We miss him but rejoice of his eternal life. A celebration of life will be held on Saturday, April 23 at 11:00 AM at Stafford Crossing Community Church, 1420 Forbes Street, Fredericksburg, VA. In lieu of flowers the family suggest memorial donations be made to either Stafford Crossing Community Church or the charity of your choice.

Bernard Marion Moses was born on April 12, 1937, the third child of Marion and Hazel Moses and was raised in Alexandria on a working farm. He married Betty Ann Steele on February 10, 1955 and, though they were teenagers, they remained married... View Obituary & Service Information

The family of Bernard Marion Moses sr created this Life Tributes page to make it easy to share your memories.

Send flowers to the Moses family.