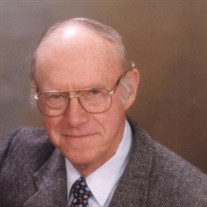 Baxter Farthing, longtime resident of Manassas, Virginia, died peacefully on Tuesday, January 12, 2021. Baxter was born on December 2, 1926 in the Sugar Grove Community of Watauga County, North Carolina. He was the son of the late Dixie Glenn and Benjamin W. Farthing. Shortly after graduating from Cove Creek High School in 1944, Baxter moved to Cleveland, Ohio where he spent six months working at a defense plant making materials for use in WWII. While in Cleveland, he learned several trade skills including welding. Upon turning 18 in December 1944, Baxter followed in his older brothers’ footsteps by enlisting in the U.S. Navy. His ship, the light cruiser U.S.S. Amsterdam (CL-101), was about to deploy to the western Pacific when Japan surrendered in 1945. He worked as a welder aboard the ship doing repairs and other duties. After being honorably discharged in July 1946, he returned to Watauga County and assisted his father on the family farm, where again he used his welding skills to design and build metal gates and wagons, some of which he sold to other farmers in the community. He met his wife Reba Cook in 1957, and the couple married in January 1958. Soon thereafter, they moved from North Carolina to northern Virginia where he worked in construction for about the next ten years. After starting his career as a realtor in the late 1960s, he co-founded and ran a successful real estate business where he specialized in land sales primarily in Prince William and Fauquier counties. Baxter and Reba had three lovely daughters, one of whom tragically died at the age of five. By 2003, they had been blessed with two beautiful granddaughters, whom they cherished. He was always an avid NASCAR race fan, attending many races all along the East Coast over the years. In addition, he enjoyed listening to traditional Bluegrass and Western Swing music and dancing to Country Music. Beginning in the late 1980s after Baxter’s retirement, he and Reba spent their time traveling across North America in their RV. He loved filming his travels, editing the videos, and sharing them with family and friends. As a family historian, he took pride in researching and documenting family history which he shared at family reunions. Together Baxter and Reba also volunteered their time by helping others in the Manassas area through delivering Meals on Wheels for eleven years. Baxter is survived by two daughters, Rachel Farthing and Patricia Farthing Frisby, her husband Robert, and granddaughters Laura and Caroline Frisby, all of Bristow, Virginia. He is also survived by his sister-in-law Agnes Farthing of Colfax, North Carolina, along with a number of nieces and nephews. In addition to his parents, he was preceded in death by his wife Reba in 2019, their daughter Glenda Carole Farthing in 1968, and seven siblings: Frances Farthing, Laura Farthing Church, Raymond, Wheeler, Louis, and twins Benjamin and Dixie Farthing Huff. A graveside funeral service will be held outside of the Rose Chapel at Mount Lawn Cemetery in Boone, North Carolina on Tuesday, January 19 at 11:00 a.m. A Celebration of Life will be planned at a later date due to the pandemic. In lieu of flowers, donations may be made in Baxter’s memory to his family church- Valle Crucis United Methodist Church (2945 Broadstone Road, Banner Elk, NC 28604), Samaritan’s Purse at https://www.samaritanspurse.org, or to the charity of your choice.

Baxter Farthing, longtime resident of Manassas, Virginia, died peacefully on Tuesday, January 12, 2021. Baxter was born on December 2, 1926 in the Sugar Grove Community of Watauga County, North Carolina. He was the son of the late Dixie Glenn... View Obituary & Service Information

The family of Baxter Greer Farthing created this Life Tributes page to make it easy to share your memories.

Send flowers to the Farthing family.