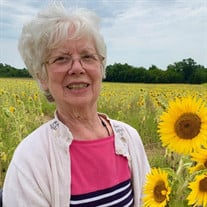 Barbara Anne Hester, age 78, died on July 29th, 2021. Born in Washington, D.C. she was the daughter of the late Lt. Colonel Milton Henry Hagemann Jr. and Mary Dyson Hagemann. She attended Verdun High School in France while the Hagemann’s were stationed overseas. She returned to the U.S. where she obtained her Bachelor of Arts degree at Mary Washington College in Fredericksburg, VA as part of the class of 1965. She went on to become an elementary school teacher and married the love of her life, Ben Hester, in 1970. As one of the signs over her kitchen sink reads, “There’s a special place in heaven for a mother of four”. She devoted her life to her four children by wearing endless hats such as Brownie Leader, Dance Mom, Cub Scout Mom, Soccer Mom, Chauffeur, and many more. Barbara cherished being called Grammie by her four grandchildren, whom she adored and spoiled. In addition to her children and grandchildren, she also acted as a second Mom and Grammie to many including close friends of the Hester family. For over a decade, she worked at the Flower Gallery of Manassas where she became a part of their extended family. She was known for creating countless gift baskets, setting up many beautiful wedding flowers, and most importantly she never met a stranger. As the other sign over her kitchen sink teasingly reads, “I like to live in the fast lane, but I’m married to a speed bump”. Barbara enjoyed traveling and over their 51 years of marriage, she and Ben travelled to many places with friends and family. She enjoyed cooking and was known for making her famous crab cakes and Grammie rolls. She is survived by her husband of 51 years, Ben Hester; her daughter, Susie Lunsford and husband, Jimmy; her daughter, Bonnie Guerrero and husband, Chris; her daughter, Carrie Coburn and husband, Mike; her son, Brad Hester; her grandson, Ty Wright; her granddaughter, Haley Wright; her granddaughter, Grace Guerrero; her grandson, Gavin Guerrero; her brother, Jim Hagemann and wife, Barbara; her brother, Joe Hagemann and wife, Iradia. In lieu of flowers, friends and family wishing to honor Barbara are invited to make a donation in her name to the Alzheimer’s Association. By Check: Alzheimer's Association, P.O. Box 96011, Washington, DC 20090-6011 By Phone: 800-272-3900 Visitation Saturday, August 7, 2021 12:00pm- 2:00 pm Pierce Funeral Home 9609 Center St, Manassas, VA 20110 Reception to Follow Saturday, August 7, 2021 2:30pm – 4:30pm Sinistral Brewing Company 9419 Main Street Manassas, VA 20110 ***free parking is available in the parking garage located at 9102 Prince William Street Manassas, VA 20110 Full link to ALZ Donations: https://act.alz.org/site/Donation2?df_id=48292&48292.donation=form1&mfc_pref=T&_gl=1*p21buz*_ga*ODQ0MTgyMDUuMTYyNjk1ODUzOQ..*_ga_9JTEWVX24V*MTYyNzU5OTg0Ni40LjEuMTYyNzU5OTg5My4w&_ga=2.129687756.1505416391.1627599846-84418205.1626958539&_gac=1.116614900.1627599846.CjwKCAjwo4mIBhBsEiwAKgzXOG_XmAycrQr2ZQ0bI8ZwZQet91VsIjfUhimfql9NpyTbcf7TxcjiBBoCJX0QAvD_BwE

The family of Barbara Anne Hester created this Life Tributes page to make it easy to share your memories.

Send flowers to the Hester family.