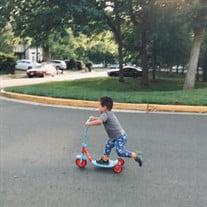 A bright morning, quiet, everyone is asleep. Bairon Alexander watches his father preparing to leave to work in the morning. He looks up and tells his father, Byrol, &#8220;Papi no te vayas a trabajar&#8221; his big brown beautiful eyes stare... View Obituary & Service Information

The family of Bairon Alexander Zapata Castillo created this Life Tributes page to make it easy to share your memories.

A bright morning, quiet, everyone is asleep. Bairon Alexander...