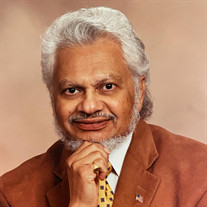 Arun “Yogi” Parekh, passed away on July 16, 2021 peacefully in his sleep surrounded by his loving family. He was born on April 23, 1944 in Amalsad, India to Chhotalal and Gajaraben Parekh. The middle child of five brothers, Arun was born into a business family of goldsmiths. His interests were more in academic pursuits, for which he moved to Mumbai to pursue an undergraduate degree in Psychology and Philosophy at Bhavan’s College. Arun assimilated well to Mumbai, with his adventurous personality, zest for life, and ability to form new connections. Arun, rocking a “Dev Anand” inspired style, broke societal norms, marrying his one true love. Arun and Bharti were married on June 7, 1966. They shared a passion for movies and academic interests. Together they raised three strong, independent daughters, Heena, Reeta, and Priya, better known by their nicknames, Dabhu, Nani, and Pinky. In September, 1977, Arun and his family immigrated to the suburbs of Virginia, USA. While working full time at Navy Federal Credit Union, Arun further pursued his core interest and received a Masters in transpersonal studies from Atlantic University in Virginia Beach in 2000. A testament to his devotion to the teachings of his Yogi, Paramahansa Yogananda, Arun woke up at 4am daily to practice meditation. He believed that with deep focus, belief, and passion one could accomplish anything. In his retirement, Arun followed his passion for writing. He authored three books exploring the practical application of meditation in achieving an optimal state of mind for a fulfilling life to better humanity. At his core, Arun valued family and close friendships, above all else and instilled those values in his three daughters and six grandchildren. Arun is truly remembered for his compassion, wisdom and charitable nature by all who had the pleasure of knowing him.

Arun &#8220;Yogi&#8221; Parekh, passed away on July 16, 2021 peacefully in his sleep surrounded by his loving family. He was born on April 23, 1944 in Amalsad, India to Chhotalal and Gajaraben Parekh. The middle child of five brothers, Arun... View Obituary & Service Information

The family of Arun Parekh created this Life Tributes page to make it easy to share your memories.

Send flowers to the Parekh family.