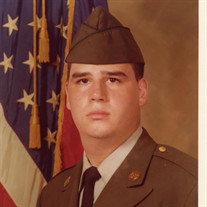 Arthur Ivan Tamariz, known by most as Art, was born on June 13, 1962 in Bethesda, MD and passed away peacefully May 27, 2021 at Prince William Hospital surrounded by family. He graduated from Annandale High School in June 1981. He played football for the Annandale Atoms during his freshman and sophomore years. He loved watching his son, Justin, play football for the Westfield Bulldogs in Chantilly, VA. He proudly served in the United States Army from 1981 to 1984 as a Cavalry Scout. He served in Bad Kissingen, the Federal Republic of Germany, in the Second Squadron of the 11th Armored Cavalry Regiment (“Eagle Horse”) from October 9, 1981 to April 8, 1983. He worked for multiple Government Contractors in IT positions. He last worked for General Dynamics in 2013 as a Field Service Representative. He was united in marriage to Vickie Lynn (Mechalske) Tamariz on June 25, 1994 (26 years). He is survived by his father, Dr. Theodore Tamariz; mother, Maria Tamariz; ex step-mom, Diane (Dave); wife, Vickie; daughter, Savannah; son, Justin; brothers, Javier, Edward (Jacqueline), Albert (Maya); half-sister, Patricia; niece; nephews; cousin, Patricio Tamariz and extended family in Ecuador. He was extremely proud of his two grown children and their accomplishments. He enjoyed the outdoors (no camping), and loved riding his blue Honda motorcycle with his adventurous riding buddy, Lee. He enjoyed taking his dog, Fonzie (March 2011 to December 2019), then Rascal, to the dog park on weekends. He will be greatly missed by his family, friends and all that knew him. A funeral service will be held at 1:00 PM on Sunday, June 13, 2021 at Pierce Funeral Home in Manassas, VA. It will be live-streamed from Art’s obituary page at piercefh.com/obituaries. A Celebration of Life will be held at Pierce Funeral Home following the service. In lieu of flowers, memorial contributions may be made to K-9 Lifesavers, 259 Thorny Point Road, Stafford, VA 22554 or k-9lifesavers.org/in-memory-of.

Arthur Ivan Tamariz, known by most as Art, was born on June 13, 1962 in Bethesda, MD and passed away peacefully May 27, 2021 at Prince William Hospital surrounded by family. He graduated from Annandale High School in June 1981. He played... View Obituary & Service Information

The family of Arthur Ivan Tamariz created this Life Tributes page to make it easy to share your memories.

Send flowers to the Tamariz family.