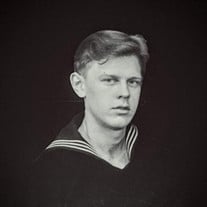 Arthur Raymond Baltrym, 94, of Gainesville, VA, passed away December 21, 2020, after a brief bout of pneumonia. Art was born July 12, 1926, in Maspeth, Queens, NY, the second of two sons born to Lithuanian immigrant parents. Art enlisted in the United States Navy during World War II at age 17, just months after his high school graduation. Art was a year younger than his peers, as he had skipped a grade during elementary school, therefore requiring written parental permission to enlist. Art served as a Specialist 1st Class Radioman aboard the USS Shelton (DE-407), a destroyer escort in the Pacific. On October 3, 1944, 14 months after his enlistment, the Shelton was struck by enemy Japanese torpedoes off the coast of Morotai, Indonesia. The USS Richard M. Rowell spotted and removed the adrift crew, who were taken to Morotai Island and later rescued. After recuperating from his injuries, Art was honorably discharged home to Queens, NY. Upon his return home and during recovery from his injuries, he worked on a commercial fishing boat on the eastern end of Long Island. Art inherited his father’s love and knowledge of fishing, which he continued to share with his children and grandchildren. He joined his father in the printing business, becoming a member of the Amalgamated Lithographers of America Local 1 Union, and after an apprenticeship, became a professional lithographer. He worked at US Printing and Lithographing in Brooklyn and Westbury, NY. He received the Albert Castro Award by the ALA Local 1 in 1955. He relocated to Arlington, VA, in 1974 with his family, and retired from Stant Lithograph, Inc., in Maryland in 1988. Art was especially known for his wit, wisdom, crystal blue eyes, and loving smile. He enjoyed traveling up and down the East Coast, from Florida to Maine, feasting on good seafood and stopping at some of his favorite horse racing tracks, including Gulfstream, Belmont, and Saratoga. He loved his cigars and martinis, switching to wine after heart valve replacement at age 87, but continued his almost daily cigar and wine until he developed pneumonia the last few weeks of his life. Art is survived by his wife, partner, and soulmate of 40 years, Joanne T. Cole of Gainesville, VA. He is also survived by son Arthur R., Jr. (Jan) Baltrym of Arlington, VA; daughter Donna J. Mooney (nee Baltrym) of Springfield, VA; six grandchildren: Arthur M. (the late Christine Wine) Baltrym of Falls Church, VA, Jonathan (Paige Poultney) Baltrym of Herndon, VA, Margaret K. (Nick Ayuso) Mooney of Bronx, NY, Aileen C. (George Roland) Mooney of Springfield, VA, John (Jack) P. Mooney, Jr. of Arlington, VA, and Maura A. Mooney of Springfield, VA; five great-grandchildren: Sienna, Michael, Sophia, and Anthony Baltrym, and Molly Jean Mooney-Roland. Art also had a number of nieces and nephews. Art was predeceased by parents Walter and Mary (Yasas) Baltrym, brother Walter Baltrym Jr., and first wife Margaret (Bette) Shaw Curran. A private service and inurnment at Arlington National Cemetery will be held at a later date. Art was very impressed with the work of Chef Jose Andres throughout the world. If desired, donations can be made in his honor to: World Central Kitchen 655 New York Ave NW, 6th Floor Washington, DC 20001 202-844-6330 Website: https://wck.org/

The family of Arthur Raymond Baltrym created this Life Tributes page to make it easy to share your memories.

Send flowers to the Baltrym family.