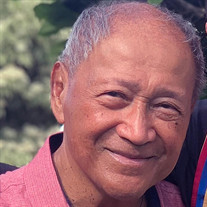 Antonio Tugade Caday, age 82, of Gainesville, Virginia, passed away peacefully on September 12, 2021. Tony was born on November 28, 1938 in Laoag City, Philippines and was the son of the late Benito N. Caday, Sr. and the late Ambrocia T. Caday. He was a 1955 graduate of Ilocos Norte High School and Far Eastern University Institute of Medicine, class of 1965. Upon graduating medical school, Tony pursued and trained in Internal Medicine at FEU Hospital. It was here where he was introduced to a young nurse and his future wife, Ruby Mercado. They were married in 1972 and were blessed with their first-born, Anna Marie. In 1974, they decided to migrate to the United States in pursuit of the American Dream. Their endeavors were not without struggles. With the help of family and friends who had already found their footing in the U.S., Tony was accepted into a training program at Englewood Hospital in New Jersey. It was this event that set them up for the beginning of a successful future and life. From 1975 to 1980, he received his Internal Medicine training at Englewood, where he worked his way up to Chief Resident. It was also in NJ, that their second daughter, Christina, was born in 1977. After passing the state board, Tony and Ruby moved to the small town of Richlands in Southwest Virginia and settled down. It is here where he served the community at Clinch Valley Hospital, Grundy Hospital, and Buchanan General Hospital. In 1981, Caday Clinic was established in Grundy, VA and Tony went into private practice for the next 19 years. They found much success with solo practice and also welcomed their third daughter, Celeste, in 1982. With a booming practice and a close-knit Filipino community, life was good. Caday Clinic became a household name in Buchanan County and he was considered a pillar of the community. He was known as “Doc” to his staff, patients, and the community of Grundy. To this day, anyone who knew him from that time, still call him by this beloved nickname. After an unexpected by-pass surgery in 1998, Tony retired that same year and moved to Northern Virginia in 1999. Settling into retirement in Gainesville, he enjoyed the fruits of his labor and learned to enjoy a less stressful life. Tony was a religious man. He was a member of St. Mary’s Catholic Church while residing in Richlands. While in Northern Virginia, he was a parishioner at Holy Trinity Catholic Church. Outside his dedication to his profession, Tony was an avid gardener who enjoyed this hobby throughout his entire life. He spent evenings at home tending to his yard and impressive vegetable garden while in Richlands. During his retirement, caring for his plants was a daily activity. His favorite flowers were orchids which were scattered in abundance throughout his home. He’d spend much of his time outside inspecting his landscape and admiring his home-grown vegetables. He got such joy from seeing a tiny bloom or the bud of a new tomato. His basement is a collection of fine liquor which he started while living in Southwestern Virginia. He loved to travel, whether by jet-setting or cross country road trips with friends. He wanted to explore all the National Parks in the U.S. in addition to all the beautiful wonders around the world. Some of his favorite travel destinations were from his adventures in the Galapagos Island, Russia, Turkey, Switzerland and South America. He equally looked forward to the many trips to his second family home in St. Petersburg, FL. Here he enjoyed the fresh ocean air, fishing on the pier, a good lobster sandwich and smoked fish, ice cream and visiting various markets. He would never say no to a casino trip and he could always be found at the black jack table. When he wasn’t traveling, he loved listening to his old music collection and never bored of watching boxing, tennis, National Geographic, Fox News and the jewelry channel. His favorite movie was Gladiator. His favorite dessert was ice cream. He enjoyed a great steak, throwing parties in his home, telling stories from his childhood, sitting on his front porch, but most of all, his greatest joy came from spending time with his “beautiful wife,” children, and grandchildren. As his family can attest, it gave him immense pleasure to sneak his grandchildren a sweet treat, especially chocolate and cookies. He will always be known to his family and friends as Tony, Dad, Doc, Papis, Uncle, Tito, and Lolo. Tony was the beloved husband of Ruby Mercado Caday for 49 years. He was a devoted father to his three daughters and three son-in-laws; Anna Marie M. Caday Ward and Robert D. Ward of Bristow, VA; Christina S. Caday and Andrew H. Huling of Vienna, VA; and Celeste N. Caday and Mark A. Gonzalez of Bristow, VA. He is also survived by his sisters Carolina C. Zialcita of Falls Church, VA and Gloria T. Caday of Washington, DC. He was the cherished and adored grandfather of Benjamin Caday, Maia Grace, Ella Reece, Alexander Caday, Noah Caday, Tyler Caday, Adelyn Rae, Cole Caday and Elijah Caday. He will be missed but not forgotten by the many nieces, nephews, extended family and friends from all over the world. In addition to his parents, he is preceded in death by his brothers; The Honorable Leonides T. Caday and Benito T. Caday, Jr. A visitation for Tony will be held on Sunday, September 19, 2021 from 5:00 PM until 8:00 PM, with a rosary prayer service to start at 5:00 PM at Pierce Funeral Home, 9609 Center Street, Manassas VA 20110. Mass Memorial Service will be held on Saturday, September 25, 2021 at 11:00 AM at Holy Trinity Catholic Church, 8213 Linton Hall Road, Gainesville, VA 20155. The family requests that all visitors to both services wear masks at all times. In lieu of flowers, the family requests that memorial contributions be made to either The American Heart Association or The National Kidney Foundation. Local Hotels for out of town guests: Springhill Suites, Gainesville 7921 Gateway Promenade Pl, Gainesville, VA (703)753-0121 Tru by Hilton, Manassas 10550 Gateway Blvd, Manassas, VA 20110 (703) 420-1500

Antonio Tugade Caday, age 82, of Gainesville, Virginia, passed away peacefully on September 12, 2021. Tony was born on November 28, 1938 in Laoag City, Philippines and was the son of the late Benito N. Caday, Sr. and the late Ambrocia T. Caday.... View Obituary & Service Information

The family of Antonio Tugade Caday created this Life Tributes page to make it easy to share your memories.

Send flowers to the Caday family.