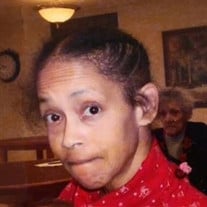 Anastasia V. Adams passed away November 16, 2017 in Alexandria, Virginia at the age of 60. Anastasia was born in Roswell, New Mexico on June 11, 1957 the third child and eldest daughter of parents Herman Adams, Sr and Della R. Guillory of Phoenix, Arizona via Sacramento, California. Growing up in the Air Force Anastasia attended several schools but graduated from General H.H. Arnold High School in Wiesbaden, Germany. Anastasia continued her education graduating from Sacramento State University in Sacramento, California with a Bachelor’s Degree in Liberal Arts with a major in English. Anastasia was a long-time employee of Pacific Bell and also worked as a Sheriff’s Deputy in Sacramento, California; and an Executive Assistant for the Arizona Cardinals Football Team. Anastasia also served as the muse to her one-time fiancé former football player and author Ernest Hill. In 2005 Anastasia suffered a brain injury but did not allow that to take away her spirit. She retained her mischievous side and always had a smile on her face. She enjoyed watching movies and keeping her baby sister on her toes. Anastasia is survived by a brother Charles (Herndon, VA), a sister Yolanda (Manassas, VA), a sister-in-law Melinda (Herndon, VA), 3 nephews Charles II, John, and James (Herndon, VA), numerous aunts, uncles, and cousins and a host of extended family and good friends. She is preceded in death by her parents Herman and Della Adams, and her eldest brother Herman Adams, Jr. it is said we do not get to choose our families but Anastasia's family, her siblings, would choose her as their sister every day of the week and twice in Sunday. Anastasia was the best big and little sister a sibling could ask or hope for. Anastasia will be deeply and sorely missed. A funeral service will be held on 1:00pm Friday, December 1, 2017 at All Saints Catholic Church, 9300 Stonewall Dr., Manassas, VA. Burial will be at Mount Vernon Mortuary and Cemetery, Greenback Lane, Fair Oaks, California, on a date yet to be determined.

Anastasia V. Adams passed away November 16, 2017 in Alexandria, Virginia at the age of 60. Anastasia was born in Roswell, New Mexico on June 11, 1957 the third child and eldest daughter of parents Herman Adams, Sr and Della R. Guillory of Phoenix,... View Obituary & Service Information

The family of Anastasia V. Adams created this Life Tributes page to make it easy to share your memories.

Send flowers to the Adams family.