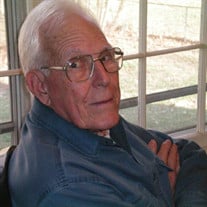 Alex Y. Mutch of Manassas, VA passed away peacefully at his home on March 17, 2021 at the age of 99. He was preceded in death by his awesome wife, Martha Kaether Mutch. They were married for 50 years. Survivors include his daughters Waneta M. Mutch of Manassas, VA, Karen R. Mutch of The Hague, Netherlands and Barbara B. Zittrer of Winchester, VA. Alex served in the United States Air Force from 1944-1971. He was a veteran of WWII, Korea (twice: 1950 & 1956) and also served 16 months in Vietnam. He began his career as a Corporal, navigator. After being promoted to Captain, he attended the R.A.F. Staff College in 1962 in Bracknell, Berks., England. Moving through the ranks he was promoted to Major and served as the Squadron Commander of the 2164th Communications Squadron, RAF, Bentwaters, England. An excellent marksman, he was Captain of the 4 man 81st Tactical Fighter Wing pistol team winning many international competitions. After being promoted to Lt. Colonel, he served at the Pentagon and aboard Air Force One during the Johnson Administration. After retiring in 1971 he took on a 2nd career with the VA Department of Labor as an inspector for 18 years. His interests were many. He had a great affinity and respect for the natural world and for many years, whenever possible, spent his time in the Outdoors. He was a member of both the Nature Conservancy and the Virginia Wildlife Federation. He was also a Civil War buff and relic hunter, enthusiastic golfer, an avid reader, excellent chef and enjoyed the beach and slot machines in Atlantic City. He celebrated his 60 year veterans award as a 32nd degree Mason in the Scottish Rite of Freemasonry, Valley of Alexandria, Orient of Virginia and was affiliated with Manasseh Lodge No. 182, Manassas, VA. Those who knew Alex considered him to be a gentleman in every sense of the word. He never met a stranger and always had a kind, encouraging word for everyone he knew. He will be deeply missed. In lieu of a funeral, Alex requested that a military burial of his cremains take place at the Culpeper National Cemetery in Culpeper, VA. Plans are currently in progress for this celebration of a life well lived. Burial will take place on (or around) September 17, 2021, which would have been his 100th birthday. Notices will go out as to date and time in August. If you would like to be notified please email: [email protected] Kudos go out to Capital Caring Hospice for the wonderful care they gave to Alex and his daughter Waneta. We were truly touched by your caring, kindness, consideration and expertise during this most difficult time. Donations may be made in memory of Alex to : Capital Caring Hospice, 24419 Millstream Drive, Aldie, VA 20105.

Alex Y. Mutch of Manassas, VA passed away peacefully at his home on March 17, 2021 at the age of 99. He was preceded in death by his awesome wife, Martha Kaether Mutch. They were married for 50 years. Survivors include his daughters Waneta... View Obituary & Service Information

The family of Alexander Young Mutch created this Life Tributes page to make it easy to share your memories.

Alex Y. Mutch of Manassas, VA passed away peacefully at his home...

Send flowers to the Mutch family.